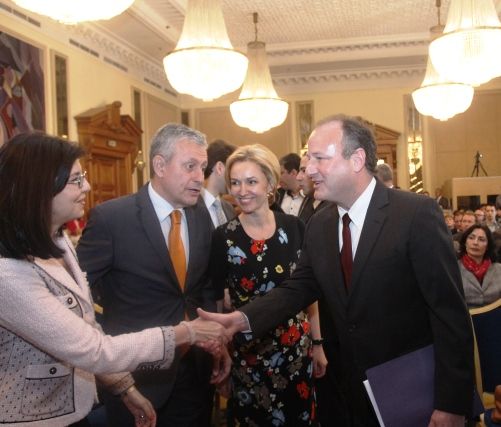 The mystery of the “report” of BAS (Bulgarian Academy of Sciences) about the positive effects of TTIP on the Bulgarian economy has been uncovered. Two ambassadors reference a nonexistent document.

There has been no analysis of the effects of the Transatlantic trade and Investment Partnership (TTIP) by BAS. This is what a response by the Vice PM on European policy coordination and institutional matters and Minister of education and sciences Mrs. Meglena Kuneva to Georgi Gyokov, an MP from “BSP-Left Bulgaria”, states. The “report” in question has been quoted by two successive US ambassadors to Bulgaria as an argument for the benefits of the trade agreement, which is currently being negotiated by the US and the EU.

As early as 3 December 2014 the US Ambassador to Bulgaria at the time Mrs. Marcie Ries argued in favor of the benefits from TTIP for Bulgaria, referencing a study by BAS. This happened during the conference „The Transatlantic Trade and Investment Partnership: perspectives for the small and medium sized enterprises”, in which Mrs. Kuneva also took part. The forum was organized by the US Chamber of Commerce in Bulgaria and the Consultative Committee of the Italian Entrepreneurship in Bulgaria in cooperation with the US Embassy in Sofia and the Bulgarian Chamber of Commerce and Industry. “The expectations are for increase in Bulgarian exports to the US by 7,7%, according to a study by BAS”, the Ambassador stated. Those words by Mrs. Ries were widely reported throughout Bulgarian media.

On 18 December 2014 the „Solidary Bulgaria“ association claimed that the US Ambassador is quoting a non-existent report. This was based on a question to Prof. Dr. Ivan Angelov – a Corresponding Member of BAS and a scientist from the Institute for economic studies of the Academy. “No such analyses have been made”, stated Prof. Angelov, who is also a member of the Scientific council of BAS. Then we asked: Will the US embassy disclose the text it uses as reference? And if there is no such text, will it apologize for the false information it uses to pressure Bulgarian authorities into rash decisions?

On 20 May 2016 the new US Ambassador Eric Rubin again advertised the benefits from signing the TTIP by referencing a report from BAS. “The Bulgarian Academy of Sciences has made some studies, according to which as a result of TTIP Bulgarian exports to the US will increase by 7,7% and, similarly, the productivity of labour (in terms of GDP per capita) in the country will increase by 6,8%”, Mr. Rubin argued in a speech before the US Chamber of Commerce in Bulgaria.

“Solidary Bulgaria” sent a letter to the official email address of the US Embassy on the same day, requesting that the report be provided to us, as it was nowhere to be found – neither on the website of BAS nor the website of the diplomatic mission. No response has been given to date. “Solidary Bulgaria” used the opportunity to send the Embassy its own study on the potential effects of TTIP for Bulgaria, published in 2015. We would like to remind that so far the only Bulgarian report which forecasts positive effects for the country has been drawn up by the NGO “Institute for market economy”, but as its own authors indicate, it was partially financed by the US Embassy.

On 2 June 2016 the MP Georgi Gyokov has submitted a question in Parliament for Vice PM Kuneva. “Is there a report or some kind of survey, analysis, by BAS on the effects from the Transatlantic Trade and Investment Partnership between the US and the EU, by whom was it commissioned and who has financed it? In the case such a document of BAS exists, I would like to ask you that it is provided to me alongside your answer”, the MP wrote.

On 10 June 2016 Mrs. Kuneva sent her response. It reads: “According to information, provided by the management of the Bulgarian Academy of Sciences, the report, which analyses the effects of the Transatlantic Trade and Investment Partnership between the US and the EU, has been drawn up by a team of researchers, working in the US. The head of the project is Prof. James Anderson from Boston College, one of the leading researchers in the field. The team includes Assoc. Prof. Yoto Yotov from Drexel University, who is also an associated member of the Institute for economic studies of BAS. During the summer of 2014, for a period of three months, Assoc. Prof. Yotov had been occupying a research position in the institute and during this time several seminars were conducted, in which the methodology and results of the study on TTIP were discussed.  Probably the connection of Assoc. Prof. Yotov to the institute has contributed to the wrong impression that this study was made by the Bulgarian Academy of Sciences. In relation to the above, I can assure you that no analysis of the effects from the Transatlantic Trade and Investment Partnership between the US and the EU (TTIP) has been made by BAS.”

“Solidary Bulgaria” would like to thank Mr. Gyokov and Mrs. Kuneva for clearing this issue. We appeal to the Bulgarian public to continue to demand from its political representatives more transparency in the ongoing negotiations. We would also like to wish the Bulgarian Academy of Sciences to find the courage to protect its name from political speculations on a more consistent basis. We hope that those involved in the discussion on the effects from TTIP on the Bulgarian and European economies will use more solid arguments in the future.