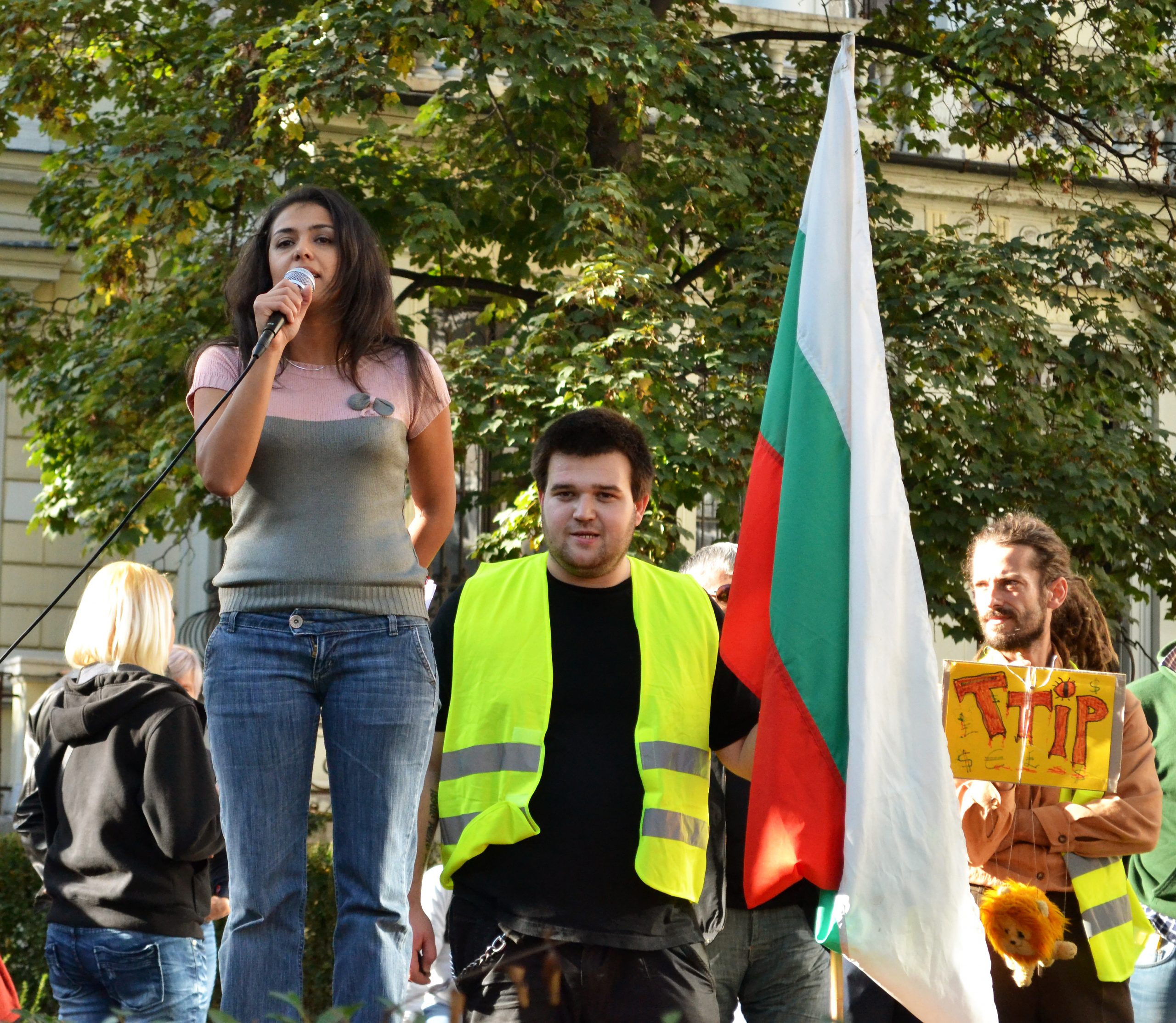 Thousands of Europeans in 400 cities across the EU protested against the power of corporations on the European Day of Action to stop TTIP, CETA & TiSA.

Hundreds of Bulgarians in 8 cities participated in the pan-European protest against the Transatlantic Trade and Investment Partnership (TTIP). Protesters gathered at 4 p.m. at the “Patriarch Evtimii” monument (known as “The Priest”) under slogans such as “No to the power of corporations/corporatocracy”, “No to market democracy”, “Stop TTIP” and “Shale gas – not for us”. Some illustrated the domestic political landscape with a string-led shabby lion marionette. 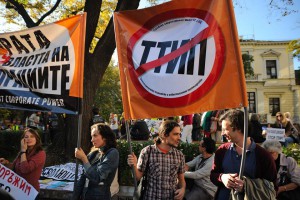 The protest was organized by “Solidary Bulgaria”, “For the Earth” ecological association, Fracking Free Bulgaria, “Haspel” Social Centre, the political parties “Bulgarian Left”, “Green party” and “The Greens”. Among the attendees were scientists, a former chairmen of the Bulgarian Academy of Sciences – Academician Ivan Yuhnovski, intellectuals, as well as prominent journalists.

Ivo Hristov of “Solidary Bulgaria” stated that “the protest is not anti-European, as conformists, who see in the EU only a career path, would try to tarnish it. On the contrary, the protest is the brightest evidence that Bulgarians realize their shared destiny with the Europeans and fight alongside all other EU citizens for their rights. The signing of TTIP will deprive the state of its capability to implement its own social and environmental policies, because each of its acts can be litigated by investors before an international arbitrary court. A raise in the minimum wage or the imposition of an environmental tax could be interpreted as harming corporate profits. Thus, states will be reduced to local administrations and democracy will be usurped and replaced with corporatocracy.” According to Hristov, “the free trade agreement between the two economic colossuses, US and EU, could have a positive impact, if it were to curb the vices of vehement globalization, close offshore zones where our taxes find a safe haven and regulate financial markets. Instead, TTIP will stimulate the vices of the market, will inject ultraliberal doping in economies and will be devastating in the medium term.”

From the stand Vania Grigorova of “Solidary Bulgaria” said: “TTIP is in its essence a coup against democracy, by which corporations aim for ultimate power. If this agreement comes into effect it won’t matter anymore who we choose to govern us. The voice of the people will account for nothing! Politicians and parties will compete only for the position of lackey to global business.”

According to Mariana Hristova, one of the faces of protests against shale gas, “we must impose strict control over the implementation and observance of the ban on fracking and all unconventional gas explorations”.

The protest’s organizers demand that all explorations are put on hold until it is clear what exactly are gas companies in Bulgaria doing, “because companies declare outside of Bulgaria that they produce by unconventional methods, be it shale gas, CBM or tight gas – all of which requires fracking –  and information about this surfaces on the American stock exchanges, while here they declare they are simply looking for oil and gas and receive every permit for access and operation at any place, especially in the Dobrudja region, where we all know, it is extremely dangerous to do this”, Hristova warned.

The demands concerning TTIP are included in a petition to be submitted to the Council of Ministers, Parliament and the President’s administration. It will also be sent to all Bulgarian members of the European parliament.

The protest rally, in which hundreds of Sofia residents took part, started from “The Priest” monument, continued through “Patriarch Evtimii” boulevard to the European Commission Representation in Bulgaria’s office and finished before the Ministry of Economics, Energy and Tourism building.

This was the first protest event after the election of the new Bulgarian parliament and a sign to the future government that the Transatlantic Trade and Investment Partnership (TTIP) and shale gas are topics, which the new government will have to handle under strict civil monitoring.